That kind of change is a tall order. But that’s what our colleagues at the Office for Victims Programs (OVP) wanted to know years ago as Colorado prepared for an increase in Victims of Crime Act (VOCA) Program funds from the federal government. The increases started in May 2016, when programs across the state received one-time infrastructure awards. In January 2017, overall funding for victim services increased through regular cycle grants.

As great as grant reports may be for counting things, they don’t necessarily tell the story of day-to-day impact. That’s why we also interviewed 30 program or executive directors who were randomly selected from agencies with VOCA funding. Directors spoke with us multiple times between 2018 and 2020 to share their perspectives on the impact of VOCA funding on their agencies and crime victims.

The subtitle for this section should be something like, “Feeling Tired? We Have Some Graphs to Explain Why.”

From 2015 (before funding increases) to 2019, the average number of clients served by VOCA-funded programs significantly increased across the state. The change was what researchers call a large effect size — the kind of effect one dreams of finding in their own research, but rarely sees. Just look at yours, though, Colorado: 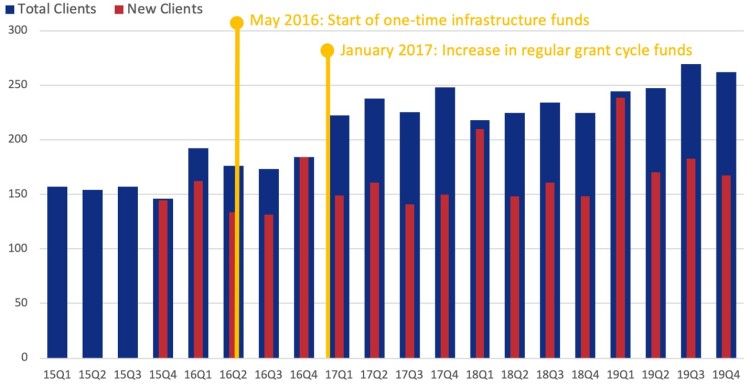 Unpacking the graph above, the blue lines represent the average number of clients served each quarter by agencies who had VOCA funding from 2015 to 2019. The red lines are new clients. We focused on the 88 agencies who had funding across the whole five-year evaluation period in order to include a baseline before funding increased. This was a rigorous, though conservative, test of impact because we set aside data from more than seventy organizations who had VOCA funding for a subset of the evaluation period.

If you’re a long-time Trauma Research Notes reader who has grown fond of thinking skeptically about data, you might find yourself wondering, “Sure, services went up, but maybe that would have happened anyway as Colorado’s population grew or agencies built on their 2015 momentum.” We hear you and applaud your skepticism. We wondered about that too, so we ran some analyses to see if there was evidence that Colorado victims services were simply on an upward service trajectory that would have happened with or without VOCA funding increases. We don’t think that’s the case. Here’s why: Below is a graph that shows the average number of clients served per quarter across years. When we compared the years, there was no significant difference between 2015 and 2016. However, a significant change in services occurred in 2017, after agencies had time to put their one-time grants to use and regular cycle funding increased.

While those data provide evidence that agencies had improved organizational capacity to serve more clients, other data showed changes in services themselves.  Below is a figure that illustrates the significant increase over time in the average number of clients who 1.) received information and referrals; 2.) criminal/civil justice system assistance, and 3.) personal advocacy or accompaniment. Agencies maintained shelter/housing and emotional support/safety service levels over the five years.

There was also evidence that agencies expanded services to minoritized and marginalized communities. For example, the number of clients who identified as Black, Hispanic/Latinx, Lesbian/Gay/Bisexual/Transgendered, and Deaf/Hard of Hearing increased over time. This was echoed in interviews with Directors, who described the ways that VOCA funding increased agency capacity to serve diverse crime victims — from freeing up funds that could then be used for interpretation services to hiring bilingual staff.

“We wouldn’t have even been there [in a collaborative workgroup] if not for the VOCA funds in most respects.

“We have some long-term very solid collaborative relationships in the community, but I think the, VOCA’s focus on civil legal services in the past couple of years has had enormous significance in the ability to think creatively, to, as a collaborative kind of leadership, to think creatively of how could we serve more people, how could we serve folks better, how do we get at a different type of need that we haven’t been able to do before.”

“We’ve been able to collaborate more with other offices to learn more and to figure out how to do some of the seemingly simple things, like updating our intake form so that it’s the most inclusive intake form possible. We’re able to collaborate with other entities to make sure that we’re representing folks in the correct way or at least providing them with a space to represent themselves in a comfortable way.”

But remember the subheading of this section because the counterweight to the many gains was evidence that agencies are straining under the ever-growing demand for their services as they try to also improve services to meet a broader range of client needs (e.g., mental health). For example, the majority of Directors indicated VOCA funding had improved their agencies’ capacity to serve crime victims initially, but their views changed by Fall 2019. In the Fall, 43% of Directors said their agencies were only able to maintain current capacities with VOCA funding, not further increase, as illustrated in the figure below.

Since 2015, agencies across Colorado used VOCA funding to expand services to crime victims. This evaluation revealed evidence that increases in VOCA funding for victim services were associated with measurable change in line with many of the priorities identified by OVP back in 2015, such as (but not limited to):

To sum things up, the last word goes to a Director who spoke with our team —

“VOCA funds are really integral to our ability to operate and function.”

Acknowledgements: Thank you to members of the Traumatic Stress Studies Group for their contributions to this evaluation. The evaluation was funded by a contract from the Office for Victims Programs, State of Colorado.

Author of "Every 90 Seconds: Our Common Cause Ending Violence Against Women" (Oxford University Press), Anne is Distinguished University Professor of Psychology and Associate Vice Provost of Public Good Strategy and Research at the University of Denver. She directs the Traumatic Stress Studies Group. View more posts